A Story Connected With FUGE

To start with, let me clarify this for anyone who may have had a misperception about the blog. Everything Claire and Joseph have been writing is fiction, and what I write is what actually happened during the day. I did not get left behind in the airport, Matt does not have a massive head wound, and Doug and Ricky did not start a stampede of cattle (today's edition). I have allowed Claire and Joseph to post these bits of humor as way to lighten the sometimes serious mood of this blog. Just to make sure there are no misunderstandings, I will be moving their segment to the end of each blog post.
So, I want to tell you guys about something really cool. Several years ago at Fuge, during a missions emphasis on the Roma people group, we were told about a Roma child called Zachariah who was very sick. The Fuge staff asked us to write a "Z" on our hand with a permanent marker, so that when we saw the "Z", we would remember to pray for baby Zachariah. This week we are working with that baby's parents, in the village (Szaflary) were they live in! The parent's names are Andrei and Ola. Their baby did end up dying, but they now have a powerful ministry in the village. Andrei is now the leader of the church in the village. It's just amazing to see this connection. Sometimes when you sit in a pew and hear about these people, you might send up a quick prayer, or drop a few bucks in the offering plate, but not really think on the reality of the matter. It's really struck me this week how real these people are. These are real physical interactions, not just hearing about it second or third hand. The IMB missionary we are working with (Jerry Goss), was also featured in some of the Fuge missions emphasis videos about the Roma people group.
Now, the rest of what happened today.
We left the hotel in Banska Wyzna and went back to the village of Szaflary. We arrived and were a little disappointed to see that most of the guys that we had played soccer with yesterday were not there. So, we had and impromptu worship service, praying especially for Andrei and his work in the village.

We then cooked and ate lunch. We had some amazing organic bacon. Each slice was about a quarter-inch thick and tasted delicious.
After lunch we played a huge game of volleyball. It was hilarious, we were smack talking each other the entire time. Mr. Andersen was absolutely hilarious. Justin gained the nickname Pele for his soccer like volleyball moves. Ricky Wampler (6'7") kept stuffing everyone. There were some awesome saves. 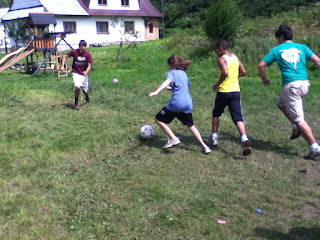 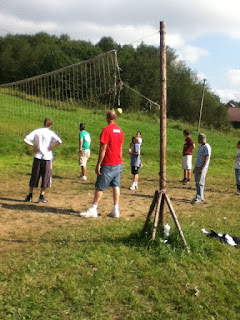 On the way back up the mountain, we broke this weeks previous record of fourteen people in a nine passenger van, and went with twenty. Sometimes you've just got to do what you've got to do. The van record in twenty four, so we may see what we can do about that.
We then came back to the hotel, ate dinner, and had our nightly share time with the believers from the village. During our worship service, one Roma man rededicated his life to Christ, and one Roma lady became a believer.
So far it has been an awesome time, and I'm looking forward expectantly to what God will do tomorrow. 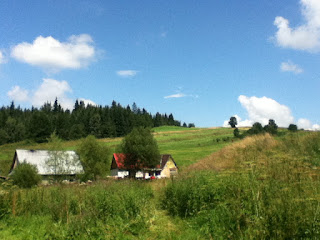 Now for Claire and Joseph's Blog

Greetings fans! Claire and Joseph here, back by popular demand! Today was an absolutely fantastic day for everyone except for Ricky Wampler and Doug Hayes. Ricky and Doug were taking a walk down the road to the local convenient store when Ricky spotted a cow begging to be milked. Being the type that Ricky is, he simply could not bear the thought of a cow remaining un-milked for more than a seven hour period. Ricky headed towards the un-milked, Polish Bovine when Doug put his foot down on the situation. "Ricky, I think we need to think through the matter at hand first before any action takes place," Doug hesitantly told him, "we do not know if there is any potential for aggressive behavior." After a moment of thought, Ricky exclaimed, "Let's go!" while grabbing Doug by the arm and dragging him towards the Polish Beast.

Ricky approached the seemingly harmless cow while it stared back in return. Moments after Ricky began her milking session, this cow no longer seemed so harmless. She began bucking, kicking, and mooing to warn her herd of her current danger. Before Ricky and Doug knew what had happened, Doug felt a blow to his pancreas, knocking him flat on the ground. Before Ricky was able to give him aid, he too was dropped to the ground with severe pain in his lower left extremities. Helplessly they attempted to inch their way towards civilization. Thankfully, Katie Andersen spotted them and heard their faint cries for help and was able to carry them back to safety.

Ricky and Doug are a little sore, but their blood pressure and spirits are still high. We will be sure to keep you all posted on their recovery. Our team is both excited and sad about our last day in the village tomorrow. We have truly had an amazing week thus far.

Signing off from Poland, until next time,
Claire Guilliams and Joseph Wampler (STILL REIGNING Polish pingpong doubles champions)
Posted by mrzchuck at 2:30 AM