This morning we left our Airbnb at 6:00 AM to spend the day at the Loveland Ski Area. I intentionally scheduled this as the last thing on our itinerary so that if someone broke a leg I wouldn’t have to cart them around the rest of our multi-state trip on crutches. Spoilers, thankfully everyone remained uninjured today.

Loveland consists of two mountains - the Valley and the Basin. Our first stop was the Valley, to get an idea of what people in Colorado consider the easy slopes. Cole and I quickly decided that we would be staying in this area and holding down the green runs for the day while Gabby, Joe, Sam, and Justin headed over to the Basin for some blues, and, in Joe’s case, one double black. We had several friends who warned us that that a green on the east coast is not the same as a green in Colorado, and we certainly found this to be true. At one point, Cole and I followed a sign that pointed to the “Easy Way” and then looked at each other in disbelief a few seconds later. That would be a blue minimum at Winterplace in West Virginia.

At one point, I made a new unexpected friend named Bob. I was waiting to get on the lift when the skier in front of me started giving me directions. “Step up here with me. Now ski to the red line. As the lift comes around, take a seat and put your poles to the side.” I was a little perplexed as to why this guy was giving me instructions, but figuring I just looked like a guy who had never ridden a lift before (although at this point I had literally dozens of rides under my belt) and this was just a friendly local, I obliged and took the seat next to him. There was minute or two of silence and then I asked, “What’s your name?” He asked me to repeat the question, I did, and he responded, “Well, I’m Bob.” I said, “Nice to meet you, Bob. I’m Ezra.” He did a double take. “Ezra?” I said, “Yes, Ezra.” He then profusely apologized. “Oh, I’m sorry. I thought you were my daughter’s boyfriend! You’re about the same height and both wearing a black mask!” We had a nice chat on the way up, and I chuckled to myself thinking about how confused he probably was that his daughter’s boyfriend was asking what his name was.

After a full day of skiing, we returned to our house for dinner, prepared in part by grill master Joe. Joe, is an expert at choosing occasions to cook when he knows everyone will be starving. At that point, he could probably serve plain peanut butter sandwiches and everyone would be happy. All joking aside, dinner was delicious. Tomorrow morning we’ll be leaving early to fly home! 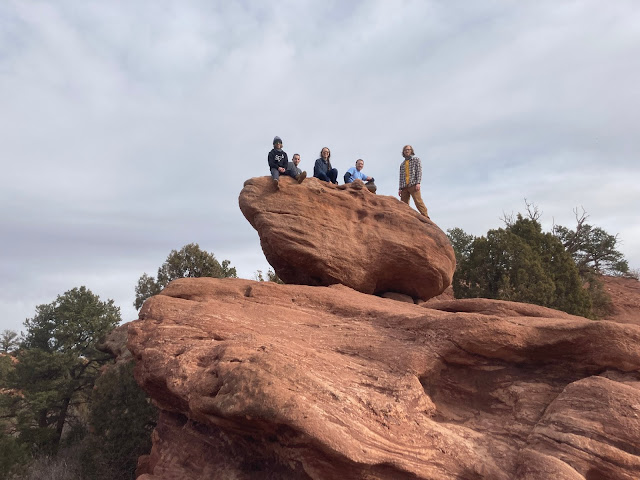 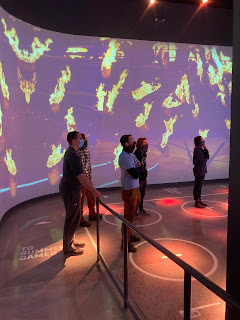 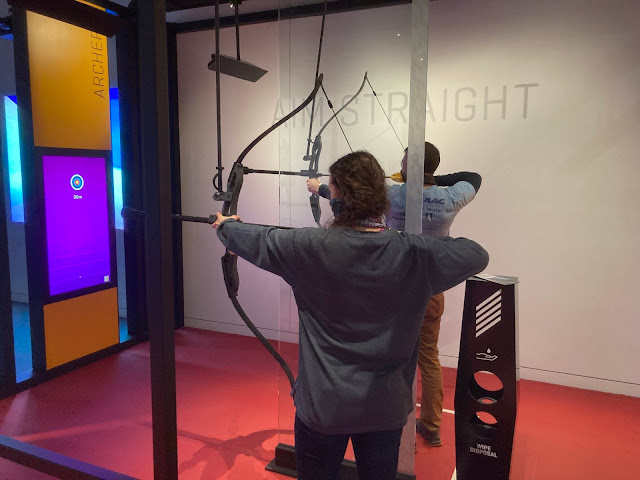 From Spearfish Canyon to Colorado Springs

This morning we left our Airbnb in Spearfish, SD and began our drive back to central Colorado. Before we left Spearfish, however, we had to explore Spearfish Canyon and see the three waterfalls the location is known for. The first was easily accessible from the road, the second was down a spur trail of less than half a mile, and the biggest of the three, Roughlock Falls, was about a mile out on a hike alongside a beautiful stream in the snow. 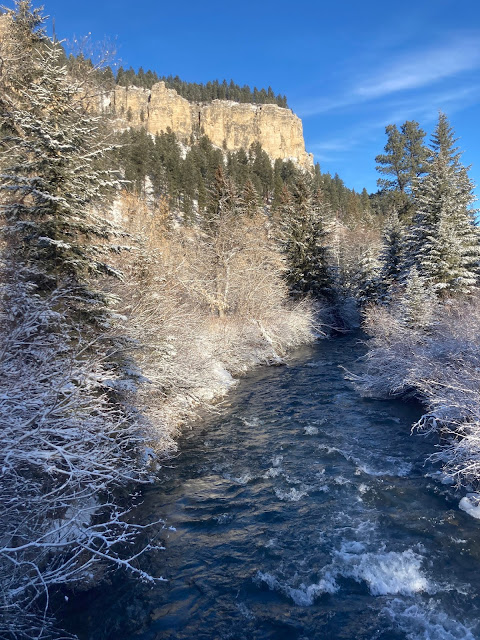 After spending most of the rest of the day driving, we made it to our Airbnb near Colorado Springs in time for a dinner of soup and grilled cheese. After dinner, Lissa and Justin gave PowerPoint presentations detailing why we should choose their preferred sunglasses retailer (Knockaround or Blenders, respectively). Both had very entertaining presentations, and, after some deliberation, the vote came down to a dead tie, with Sam abstaining.

For the rest of the evening we enjoyed playing Catchphrase and Clue before having to say goodbye to Tanner, Lissa, and Malarie, who will be heading back to Virginia tomorrow (sad day!). 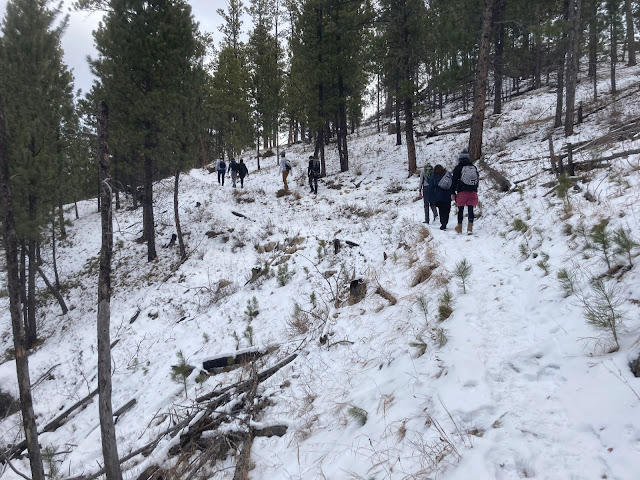 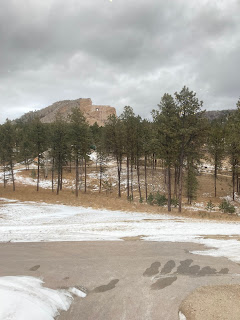 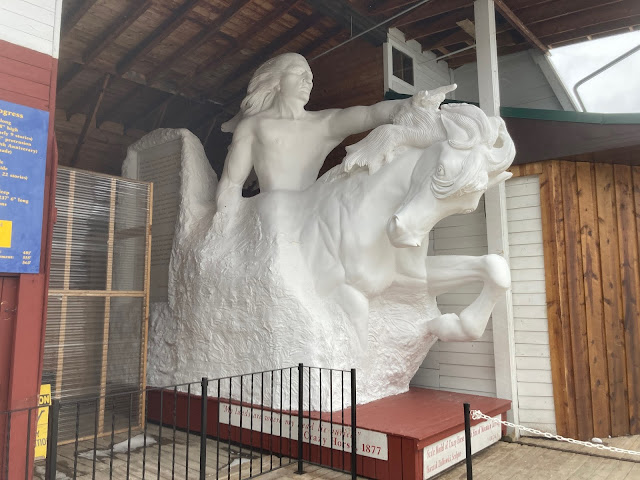 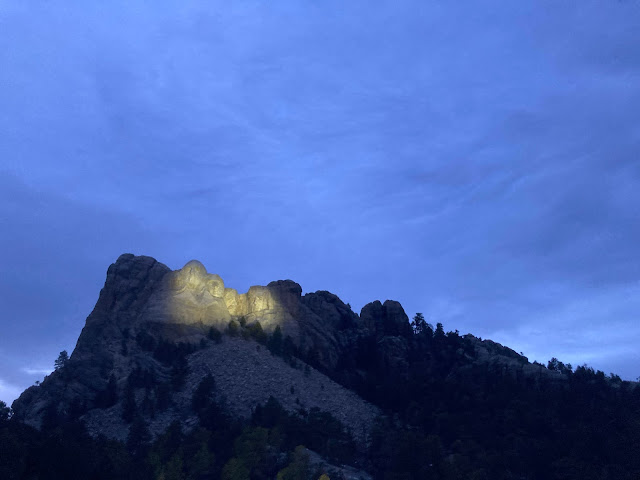 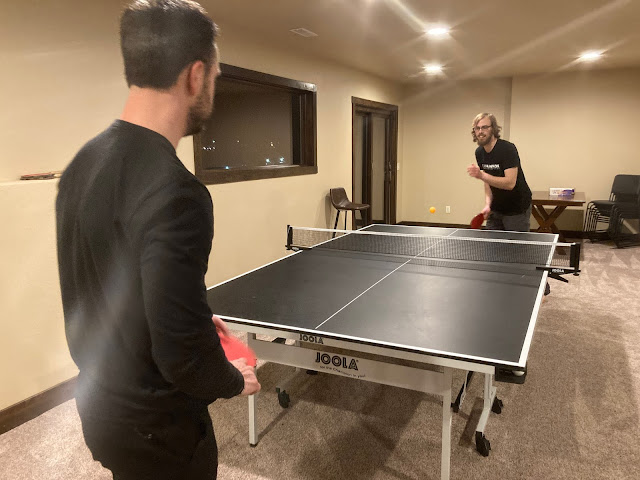 Posted by mrzchuck at 3:12 AM No comments:

From Virginia to South Dakota

Today we traveled from Blacksburg, VA to Spearfish, SD by way of three other states - North Carolina, Colorado, and Wyoming. Cheap roundtrip flights out of Charlotte to Denver heavily influenced our destination selection this year, and a group of nine of us decided to give it a go!

True to form, our group split into three separate flights - all three going out of CLT at roughly the same time, but with one group coming back a couple of days early. We all made it onto our flights, despite having to leave Blacksburg at ungodly hours, although some were closer than others. Lissa met a professional disc golfer on the plane (and forgot his name), while Sam initiated a speed-reading competition with his seat mate (unbeknownst to the other guy).

When we got to Colorado, we went to pick up our rental car and discovered quite the line. We left Joe to wait while we went outside and played hackey-sack with a guy we met from Washington. He asked, “Are you guys taking shifts waiting in line?” We looked at each other and laughed, “No, that’s Joe’s job!” Once we got the rental squared away, we began the long drive to our first AirBnB in South Dakota. Lots of interesting sights in Wyoming, including a guy towing a pickup truck down the road with what looked like just a ratchet strap.

After spending a total of 13+ hours sitting in various forms of transportation in the past day, I think we’re all ready to get out tomorrow and do some exploring! Stay tuned!