Our Last Day in Szaflary

Today was our last day in the village of Szaflary. We piled into the vans after breakfast this morning to make the daily trip down. When we first got there, we took a minute to greet the kids, and then took some of the older ones to play soccer and volleyball. 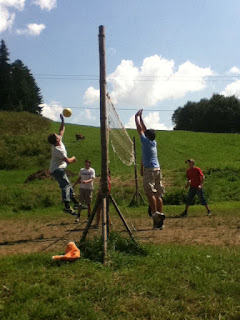 We had a great time like yesterday, giving each other a hard time the entire time, and smack talking. We had the usual Polish Sausage for lunch, along with a special type of cheese that they cooked on the grill. Once lunch was done, Mrs. Carter, a translator named Monica, and I took food to two holocaust survivors that live in the village. They were overjoyed to see us, even on this, the third day of us bringing them food. One lady said it better than any of us could. She said "You must care a lot about us to come so far to visit us!"

Also today, the Roma people put on a cultural performance for us with song and dance and traditional costumes. After we were done, Claire, Pate, Amanda, Courtney, and a few others from our team put on a cultural American performance, and taught them the Electric Slide.
On the ride back down the mountain, we got close to topping a record for Jerry's van. We managed to squeeze 22 people into his nine passenger van. The record stands at 23.
After we ate dinner, we had group share time with the Christians from Szaflary. It was a great time of sharing, but what impacted me the most was when one of our Polish translators said that he thought it was a shame that a group from America has to come all the way to Poland to work with the Roma like the Christians in Poland already should be doing. Also, he said that he is ashamed of the way that most Polish people have treated the Roma, and that he is going to work hard to break that stereotype. What he said about the Polish and Roma peoples is also true of us in America. It made me realize how important it is to reach out to those around me every day. 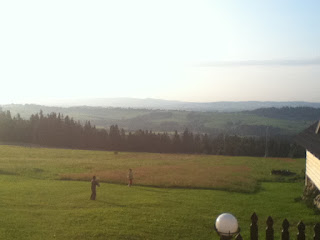 Now, I'll turn it over to Claire and Joseph...

Hello friends and fans! This is Claire and Joseph for the last time. Don't be sad, for we will return home soon and you will be able to hear of our escapades and adventures in person. Today was our last day in the village. It was such an amazing day!

As you all may or may not know, the Tour de Poland is passing through our area right as we speak. (true story) Today, we were on our way to the village as a few of the racers rode by. Mark Andersen couldn't let the opportunity to join the race slip by. He demanded that the van be pulled over so he could jump out and begin racing. A moment before he exited the vehicle, he looked both ways before crossing traffic. From across the road, a brilliant idea came to his mind. This was going to be a family adventure. He yelled for the entire family to join him and soon enough, the entire Andersen family was going to make history.

The Andersen family consisting of Mark, Beth, Katie, Dillon, Melissa, and Ian are the first family to attempt the Tour de Poland on foot. Mark should probably be on mile 47 by now. The others unfortunately did not have such luck. In fact, they are not with us anymore. Beth was apparently "in the zone" when she tripped over a log and barrel rolled off of the snow capped Carpathian Mountains. Fifty yards back, Dillon accidentally ran into an electric fence. Ian took a wrong turn and encountered the still raging Polish Beast that nearly obliterated Doug and Ricky the day before. Katie and Melissa sadly did not make it very far in the race. Around mile 1.5, inflammation began to occur in Katie's shins. Crippled by the excruciating pain, Katie had to be carried on Melissa's shoulders. A freak storm came over the mountains and the two sisters were struck by lightning. Last but certainly not least, Mark was approaching the finish line when the camera man from helicopter covering the breaking story dropped his camera on his head. Mark's idea did not turn out to be so brilliant after all. However, Mark, Beth, Katie, Dillon, Melissa, and Ian will forever be remembered as brave heroes. They have become legends and inspiration for people all around the world.

Signing off from Poland, for the last time :(
Joseph Wampler and Claire Guilliams (Undefeated pingpong doubles champions)
Posted by mrzchuck at 1:08 AM