The Last Day in Poland

Wow, this week has flown by. I can hardly believe that we are leaving Poland tomorrow morning!
First of all, there will be no blog from Claire and Joseph today. Everyone is pretty worn out, and we have to leave at 06:00 tomorrow morning. I, however, decided to push through, and bring you another blog post.
This morning we awoke and went down to breakfast for the last time. It was the usual meat and cheese fare that we have grown used to.
After lunch we packed our stuff into the vans which had just arrived. There was little bit of concern about how long it would take us to make it to Krakow, the town we flew into. It usually is a two hour trip from where we were near Zakopane. The cause for concern was a bike race (called the "Tour do Poland. And no, I'm actually serious) that was going through the town of Zakpane. So we started off, thinking we might have to sit in traffic for four hours. Thankfully, we beat the traffic, and had no problem getting to the hotel. We unloaded our luggage from the vans, and then went out to see the sights. We went to a castle, the square, the cloth hall, and a few other prominent landmarks around Krakow. 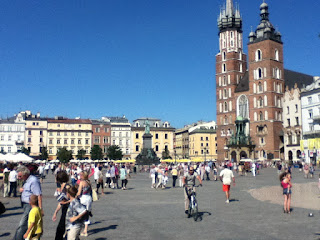 Then, my group (which was a subset of the whole group) went to eat dinner. Jerry took us to this restaurant that looked like a hole in the wall from the outside. We went inside, took a set of steps down, and went way back under the street it seemed. It was crazy and awesome. Melissa Andersen ordered fish, and she got fish all right. A whole one, with the eyes still in it. We started laughing, making fun of it, and taking pictures. Doug said, "You guys cut it out! Don't act like a bunch of hicks!" Ha-ha. 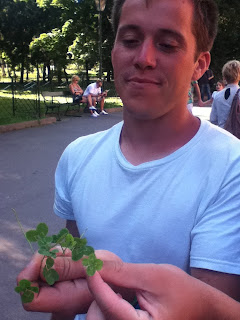 After dinner, we had a time to just debrief, and talk about how the week had gone.
After that, we went back out into the town for about an hour to see Krakow at night. 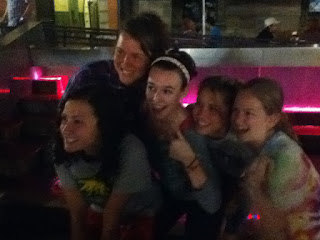