The Post That I Couldn't Think of a Title For

Hello Franklin Heights! Greetings from Ezra! Today was a stupendous day in the village. We packed into small vans and headed to the village at approximately 10:08 a.m. It was still precipitating today, so we were very limited to where we could minister. Children's ministry was inside a small house. There were probably around one dozen children, seven adults, and eight of our team members inside one room. We did balloon animals, crafts, stories, drama (where I, Ezra, made my acting debut), and songs. Outside, the fellows on our team played soccer for the majority of the time. I volunteered to be the goalie so my delicate body would not become battered and bruised. I remained unharmed PTL (Praise the Lord) but Matt Mays on the other hand cannot say the same. Matt is suffering from a minor head wound today resulting from an unfortunate encounter with a soccer ball. Apparently Matt thought his skills were a match for the Polish expertise and finesse. Well, he thought wrong. Matt is resting as we speak and we hope that the tremendous swelling will go down and he will regain vision in his right eye by tomorrow. I will be sure to keep you all posted on Matt's recovery, as the swelling incrementally recedes. Today was a remarkable day and we are all certainly looking forward to what tomorrow's day will bring. 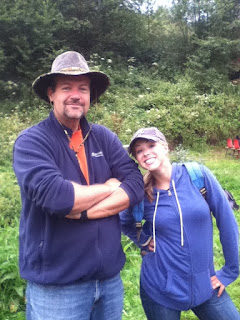 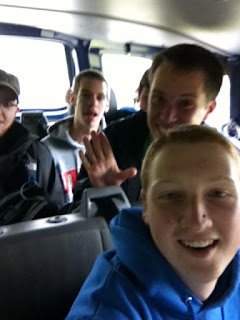 So, what really happened.
This morning we got up and ate breakfast as usual. We then packed into one van and two cars and rode down the mountain from the hotel to the village. We made two trips, and I stayed behind and waited for the second trip.
When we got to the village, it was raining, but after we played a round or two of spoons, we decided that we would play some hardcore soccer. So in the rain, under a volleyball net, running around in the mud, we played football. Hard core football.
I was playing goalie, and some of those guys looked like they could take my head off if they were able to take a straight shot at the goal. Luckily, I didn't have to take too many straight on shots, thanks to my team who did a good job blocking the shots so that the other team wouldn't get a good angle. We also made balloon animals and acted out the biblical account of Adam and Eve. We then cooked Polish sausage and chicken wings for lunch.
After lunch we took a plate of food to holocaust survivor who lived in the village. During the holocaust, her entire family was killed, and she was the only one left alive.
Once we were done at the village, we crammed back into two vans (+one small car) to ride back to the top of the mountain. We managed to fit 14 people into one of the vans, and that's with Ricky Wampler! 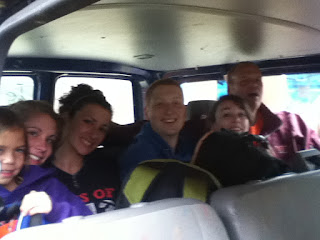 After a light dinner, we had a great time of singing, testimony, and sharing with the Christian Roma from the village we are working in. It's hard to put into words the power of a time like this. It's just so amazing that a group of people who have just met can be so connected and so real with each other after only knowing each other for a day or two. It just shows how the love of Christ can reach a across oceans, country borders, and language barriers to connect a group believers to each other.
Posted by mrzchuck at 6:12 PM