So, we’re back, the trip is over, and I’m close to recovering from the post trip haze that comes from my body adjusting back to a different time zone and American food.
I’ll do my best here to recap the last couple of days.
First of all, check out the message that Pastor Holland delivered to our combined group on the last day we were together.

On Friday, we packed up, said goodbye to several of our translators, and left to tour the concentration camp at Auschwitz. It was a long two and a half hour bus ride with Jamie sitting in his habitual place… right next to me. When we arrived, we realized that we didn’t have the three hours required for a guided tour, so we entered with a Polish tour group, and then broke away to experience the camp for ourselves. We could have spent days there, looking through all the stark reminders of the depths of depravity to which the human mind can sink when left unfettered by the bonds of basic morality. It was a saddening and thought provoking experience. We saw the execution wall, the gas chambers, gallows, and execution cells. We also toured a building dedicated entirely to the memory of the attempted complete extermination of the Roma people group – a people with whom we had spent all week working.


We left Auschwitz, and began our drive to Krakow. Doug informed our group that the bus to the airport would be waiting at the sidewalk at 4:00 am the next morning. After a second or two of contemplation, Donovan declared, “If I have to get up at 3:30, we might as well not go to bed at all! Watch out Krakow!” After we arrived out our hotel, we settled into our rooms, changed clothes, and prepared to descend on the city. 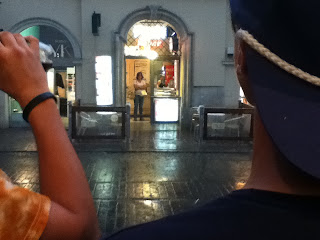 Doug, Cathy, and Pastor Holland went to dinner with Jerry and Brenda. The rest of us made our way into Old Town Krakow. We had barely made it half a mile when it began to poor the rain, forcing us to take shelter under overhanging shop doorways and awnings. There was a crack of lightning louder than I have ever heard, and Jamie jumped three feet in the air, yelled, and scared the poor shopkeeper out of her wits. After a while, Mark expressed the general feeling, “You know, who cares? I mean, really.” and started out in the rain, with the rest of us following behind. We all went to find something to eat. McDonalds fit the bill for some of us, while others preferred more traditional Polish food; for example… falafel. After we ate, we continued on, with Dillon sliding here and there on the wet concrete. At one point, we took refuge under a restaurant’s outdoor seating umbrella and were assaulted by a young man who wanted to sell us ice cream. Donovan spotted his cross necklace, and asked him “Do you know Jesus? Do you know what he did for you?” After a few minutes of conversation, we figured out that this man was catholic, didn’t understand much English, didn’t have much of an idea what Jesus did for him, and was only interested in selling us ice cream.

Donovan had several interesting conversations throughout the night. Once, a man with a brochure came up wanting to give us a tour of the city. “No, I’m from ‘round here, so we’re OK.” Donovan intoned in his thick Tennessee accent. He told me later, “Sometimes, I think of something to say, and it’s out of my mouth before I can stop it!” Ha-ha.
We ended up staying out till about 1:00 am in Krakow before deciding it would probably be a good idea to acquire some semblance of rest in order to trick our bodies into and through the next day. We grabbed our two hours of sleep, and then got up and went outside of the hotel. The bus that arrived was a seven-passenger bus (instead of 14 we thought we had reserved), but after a few minutes of broken Polish and English traded between Cathy and the bus driver, he agreed to let us all pile in.

We arrived safely at the airport, and at this point our team officially split. Karen, Cathy, Pastor Holland, Jamie, Tyler, and I began our journey homewards, and Doug, Donovan and the Andersens began their journey to Ukraine. 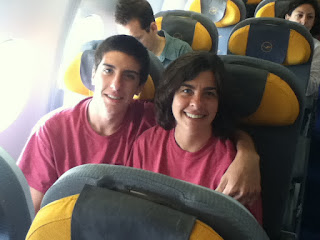 After three uneventful flights, and roughly 24 straight hours of traveling, our half of the team arrived safely at the Roanoke airport. Despite being the last flight into the airport, we had a quite a greeting party waiting for us when we arrived. Tyler began a countdown as we walked towards the terminal “Thirty more feet of Jamie. Fifteen more feet of Jamie.” Jamie decided to make the most of this time as possible, and set off every one of his noise making key chains, which he had bought in the Charlotte airport.


So, safely home, I’ve had some time to reflect on the trip. God taught me a lot of things on this trip… leaving my comfort zone, flexibility, the unity of the church, the body of Christ. But, that is a topic for another time. Continue to watch this blog, as I will make an occasional post from time to time.
Posted by mrzchuck at 8:58 PM