Gandalf and The Hobbits Hit the Trail

In June, my friends Dietrich, Carlie, Ken, and I joined our friend Beth (who was spending a month or so hiking a section of the Appalachian Trail) for a long weekend backpacking/camping trip along the Tennessee - North Carolina border. We spent two nights on the trail and hiked about twelve miles total from Spivey Gap to Sam's Gap. 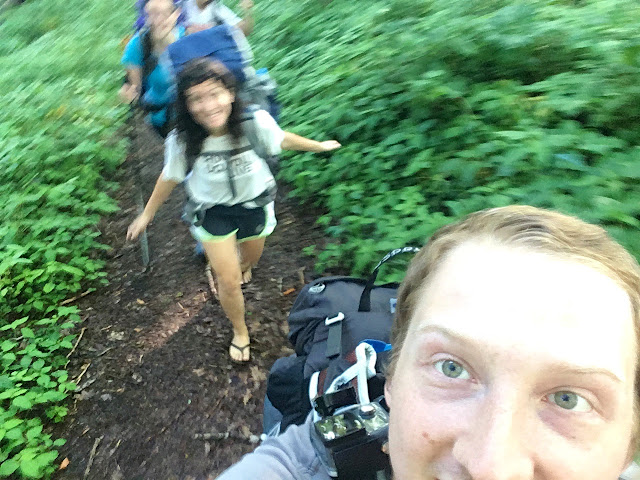 I had done long hikes before, but never any real backpacking, so this was a new experience for me. Since it was warm, I decided to forgo a tent and use a hammock and rain fly instead. This worked out pretty well, except, as Carlie pointed out, since I was out in the open, I would be the first to be eaten by any wild animals.

Carlie joined Beth on Thursday, while Dietrich, Ken, and I drove down after work on Friday. Once we had dropped vehicles in the appropriate lots (and made a pitstop at McDonalds for Dietrich), we three guys started out in the dark to find Beth and Carlie at our first campsite. When we arrived at the campsite and heard Carlie and Beth, Dietrich and Ken greeted them in friendly voices (*read* loud caveman noises).

Before we went to bed, Beth and Carlie taught us their favorite game from the previous day called "It's Not a Bear." Gameplay proceeds as follows. When one hears an unknown noise in the forest, one turns to their friend and says, "That was not a bear." It seemed to work pretty well for us, seeing as how we didn't see a single bear the entire weekend.

We started the next day with lots of uphill (and about as much complaining from Carlie). "Who put Ken in front? I have to take three steps for every one that he takes!" Despite the hard time I'm giving her, Carlie was a champ, hiking in a pair of flip flops because the shoes she had been wearing wore pretty bad blisters during the first day. Her footwear was a topic of interest for almost every hiker we passed, much to her chagrin.


The biggest point of interest along this section of the trail was Big Bald, TN - a big, open bald (go figure). We reached this spot early afternoon on the second day. As we were passing through the meadow below, we met a couple, walking their dog, who happened to be from Delaware (which, including Ken, brings the population of that state to three, according to Dietrich).

On top of the bald, we met a group of muggles that had walked up the road from the ski resort below. One older guy in particular was extremely intrigued by the idea of thru-hiking (even over our short distance) and had lots of questions. "Generally, what do you eat? "Generally, do you get lost?" "Generally, do you sleep in tents?" (He really liked the word "generally.") We answered his questions as best we could, and, before we left, he asked to take a picture with us. As we were leaving, he told us, "You guys are heroes!"

We were expecting a rainy weekend, but it wasn't until we were leaving Big Bald that a storm rolled in. We stopped to put on rain jackets and pack covers and then continued on our way. A while later, we noticed we had somehow left Ken behind and stopped to wait on him. He wasn't bitter about this development at all, but did spend the next several minutes telling us how some nice man he met helped him put on his pack cover since he didn't have anyone else around to help him.

It's hard to carry on a conversation in the rain, so we walked in silence for a good while... even after it had stopped raining. At this point, Carlie realized, to her horror, that she was the only (strong) extrovert in our group. She kept trying to start a conversation, but the rest of us weren't buying it. Eventually, she said, "Uggh. Why are all of my friends introverts?!"

As we were walking along, we discussed how we were hoping to stay dry that evening. Dietrich interjected, "Hey, Ken!" Ken replied, "Whatever you're about to say, it's not true." Dietrich went on to explain how he had cut some holes out of Ken's rain tarp to use the material to patch something, and Ken just nodded his head and said, "Uh-huh."

The rain had mostly stopped by the time we made it to our campsite, which was good. We cooked our dinner (including a couple of the large cans of food Ken had brought along) and then hung the rest of the food in the bear bag. It started to rain soon after dinner, so we all huddled together under my rain fly to stay dry. We sat and talked for a while, and Beth told us a couple of stories from her time on the trail thus far.

The next morning, we set out early to complete the last few miles to the parking lot. We climbed out of the valley and walked along the ridgeline with North Carolina on our left and Tennessee on our right. The clouds were rolling over the mountains, which made the forest look very "Lord of the Rings" like. 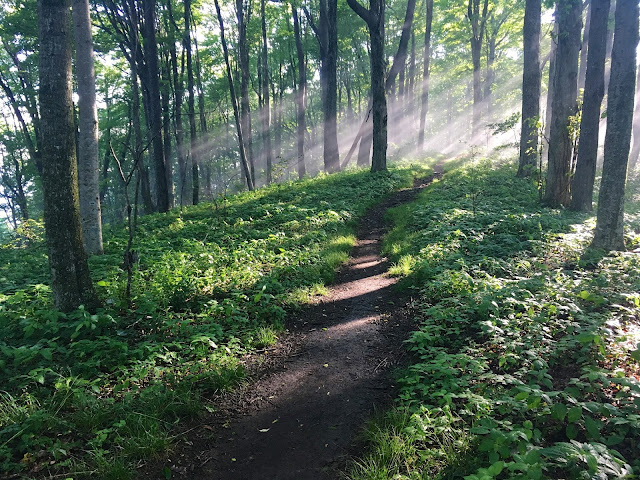 At some point, Dietrich ran off by himself down the trail and I mentioned that he looked like Samwise Gamgee, with the pots from dinner the night before hanging off of his pack. From there we decided Beth and Carlie could be Merry and Pippin (because Merry takes care of Pippin when he gets in trouble), I would be Frodo, and Ken could be Gandalf (because he was always in front, obviously).

Around midmorning we made it to our destination parking lot and took one final group picture, in "tallest to greatest" order. At this point, we said goodbye to Beth, who was on her way to the next shelter. A few hours ride back and Dietrich, Carlie, Ken, and I were home (after a stop at Sakura) while Beth continued on into the Smokies!