This summer, my friend Jeff was working an internship in New York City and I went up for a visit. I had never been to New York before, but decided to make a weekend trip out of it. I researched flying or taking a train, but ended up just driving the ten hours into the city, leaving work early on Friday afternoon and arriving late that evening.

I arrived at the 92nd Street Y on the upper east side where Jeff was staying after only a few surprises (did you know there's a $15 toll to cross the bridge to Manhattan island? E-ZPass only!). I picked Jeff up from a hackathon his company was doing and we stashed my Jeep in a nearby parking garage. It was incredible how many vehicles they had packed in there. From there we made our way back to the 92nd Y, which has an interesting history. Most people (at least from where I'm from in Virginia) think of the Y as a gym. This Y has a gym, but it also has a well-known performance venue, and dormitory style housing. Many Y's used to be like this, but only a few of them are left.

Jeff asked me what I wanted to do the following day, and, although I didn't have a strict agenda, there were several things that I was interested in seeing/doing. Jeff told me, "The good thing about New York, you'll never run out of things to see. Just step out of your building and start walking!"

And walk we did.

We started the day with a bagel at Jeff's favorite local bagel shop, Corrada Bread and Pastry. From there we took the subway down to the financial district and took a walk down Wall Street (after a quick dip into Pret for Jeff to get some tea).

This was the first of several discoveries in the same vein. I was surprised at how small Wall Street is. A lot of these landmarks in New York I had read about in books and heard about on the news growing up, and, somehow, in my mind, they had taken on larger than life qualities. Wall Street was my first dose of reality. A few buildings clustered around a central square, rather than a long street filled with financial buildings that I had expected.

We headed towards the Staten Island Ferry, passing the famous Raging Bull statue on the way. I decided not to stand in line just to take my touristy picture this time (the Four Corners incident being fresh in my memory).

Rather than actually do the Liberty Island tour (which seemed like it would take up a good portion of the day) we did the drive by (or the boat by, as the case may be) of the Statue of Liberty via the Staten Island Ferry. I enjoyed the ferry ride out through the harbor, but, again, I was surprised by how short the Statue itself was. Not quite the towering monument I had imagined it to be, but it was still cool to see it in person.

Next, we walked up through Battery Park on the tip of Manhattan Island and then walked north to the 9/11 Memorial. I had watched a documentary on the design and completion of this memorial several years prior, and it was interesting to see it finished. Almost sixteen years later, if it weren't for the memorial, it would be hard to tell that something so terrible had happened there.

Next, it was time for some lunch. We made our way to Chelsea Market and had lunch at the Creamline - a "farm to table" burger joint. I was already pretty hot by this point, so I may be exaggerating slightly when I say that the peanut butter milkshake I had there was incredible, but it was definitely delicious.

From there, we walked the High Line, an elevated walking path on the west side of Manhattan, converted from a freight rail line into a linear park. It was cool to be above street level, get a different view of New York, and not have to worry about traffic.

The next stop was "The Intrepid," an aircraft carrier that has been transformed into an air, space, and marine museum. This is where Jeff's company began to throw their weight around. We walked up through the "members only" line (past all of the waiting peasants), Jeff flashed his badge, and both of us were admitted for free!

The ship was pretty cool. Among many other things, they have an SR-71 Blackbird, a submarine (which we went inside of), and the Space Shuttle Enterprise, which I had previously seen at the Udvar-Hazy Center (later replaced by Space Shuttle Discovery). However, my favorite part may have been a couple of LEGO models of the ship and a LEGO mosaic. 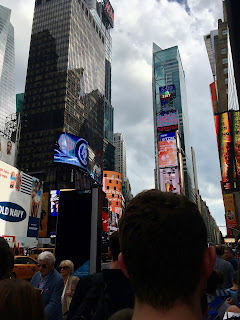 After Times Square, we made a stop for rolled ice cream and then visited The Strand book shop, known for its "18 miles of books." Jeff quickly made his way to his favorite section (see below), and I found a llama that was nearly identical to the one that sits in my living room (long story)!

We jumped on the subway again and got off at Grand Central Station, where Jeff followed me, unsurprised, into the Apple Store. I remember watching a video on the opening of this particular store, and now I finally got to see it in person! Ha-ha. I'm slowly collecting pictures of myself at various Apple stores around the country. That's basically the only reason I travel.

Next, we went to visit the building Jeff worked in. He wasn't sure if all of the visit request hoops would be cleared cleanly, but when we got there, the nice security guards took my picture and gave me a temporary badge, no problem!

The final big attraction of the day was the Metropolitan Museum of Art. We only had an hour and a half or so before they closed, but we figured we'd make the most of it. I'm sure we saw hundreds of masterpieces in the space of 45 minutes. We spent a significant portion of our time in the medieval armor and weapons section (because when you're both guys who grew up on Lewis and Tolkien, that's what you do). We also quite enjoyed the Egyptian temple that was picked up and shipped to New York. My favorite piece, however, was probably "Crocodile."

After they kicked us out of the museum, we visited the casual obelisk erected behind the museum on the edge of Central Park. At this point, I was pretty much beat, but Jeff still had plenty of energy and suggested we take a stroll around the reservoir in Central Park (because what's another couple of miles of walking). I figured if Jeff was up for it, I could be too!

For dinner we made a stop at Two Boots Pizza, Upper East Side. Again, I was pretty hungry, and the pizza was delicious. After we finished our dinner, we made one last stop at the headquarters for the company Jeff was interning with (weird elevators) and then called it a night.

Altogether, we walked roughly 24 miles total (+/- a mile or two, based on discrepancies between Jeff's Fitbit and my iPhone) that day. Just walking to the shower at the end of the day made my feet hurt.

The next morning, Jeff and I grabbed breakfast at a diner called 3 Decker (A+ waffle, by the way) and then made our way to the church he attended while in New York, Apostles Uptown East. They had a Behringer X32 as well (as does Northstar, the church I run sound for), so I spent a few minutes talking shop with their sound tech.

After that, Jeff and I retrieved my Jeep from the parking garage (no easy feat), and I started my journey back home. The weekend consisted of over 1,000 miles of driving, numerous subway rides, in addition to all of the walking, but it was great!
Posted by mrzchuck at 11:14 PM