I hope everyone enjoyed the blog from yesterday. For those of you who have asked, the video was the same one that was shown in youth group at FHBC on Wednesday night. Also, if you click on each of the pictures on the blog, you can see them in full resolution. This includes the group shot at the top of yesterday’s post.
So today was our second and final day in the village of Podhorany in Slovakia. This morning, we loaded into the vans, and began our trip to the village. The drive to the village is absolutely beautiful (Tyler says “Hey”). We drive to the southern border of Poland, and then drive over the Tatra mountains and into Slovakia.
We had many young kids waiting for us when we pulled into the village today. We told them yesterday that we were coming back today, and they were right there waiting for us. For safety reasons, Jerry had a quick word with the person of peace before he let us get out of the vans. It was clear, so we hopped out of the van, and began setting up for the Redeemer skit. I had a chance to play some music as we waited for people to gather for the skit. I chose my songs carefully (sorry, no dubstep Alex and Joseph), and our playlist included “God of this City,” “God’s Not Dead (Like a lion),” “Your Love Never Fails,” and “Forever Reign.” In case you’re unfamiliar with these songs, three of the four of them came off of the Newsboys’ latest CD, “God’s Not Dead.” “God of this City” is the only song that didn’t, but I thought there was something very powerful about being able to play this songs as several hundred Roma from the village gathered to hear the gospel message preached. Truly the Lord God was/is the god of this city (or village), just as he is anywhere else; Poland, Slovakia, the USA, etc.
On this particular day, I was with Mark’s group, and we started playing Frisbee with some of the kids. Towards the end of the game, Mark asked a Polish interpreter to translate from English into Polish, and another translator, who then translated what he said from Polish into Roma. Mark shared with them the story of the gospel, and related it the best he could in terms a child could understand.
We then went back to where the vans were parked, and performed the skit one last time before we left. This time, it was my turn to give an explanation of the gospel message presented in the skit. I was a bit nervous to start with, but managed to make it through my gospel presentation.
After the Redeemer skit, Jerry was going to try to hand out copies of the New Testament in Slovakian audio book form (most Roma can’t read). But as he opened the back door of the van, a lot of village kids wanted the three balls that they could see were in the van. No problem right? We were planning on giving the balls away anyways. Except for the fact that there was only three, and every kid wanted one. Donovan and I were packing up the portable sound system when we saw Doug waving our team to hurry to the vans. We decided against opening the back door to put in the sound equipment, and went straight to one of the vans. Donovan told me to hop in, I did, and he cleared the way for Jerry to back out his van. Once we were sure we had everybody in the van, we quickly left the village. We appreciate your prayers this morning while we were in this village. The Lord kept us safe, and we are grateful to Him.
Tonight, we had our last time of sharing with the Roma. Doug played a bluegrass selection on one of the hotel guest’s fiddle, and there were worship songs by Katie and Melissa, and the Roma. We also had an ethnic celebration hosted by the Roma.
Tomorrow, we leave for Krakow, and would ask for your continued prayer as some of us stay in Poland, and some of us continue on to join the Ukraine team. *Editor's Note: Unfortunately, the following text has been given a rating of less than 50% in terms of historical accuracy. Besides the part about Jamie. That part is completely true.

Well blog fans it is with great sadness that I tell you that this will be my last blog. It seems that Mr. Z Wymiotowac is heading back to the states the day after tomorrow, and insist on taking his computer with him. I am sorry but will promise to fill you in on the rest of our great adventures when I return home from the Ukraine. 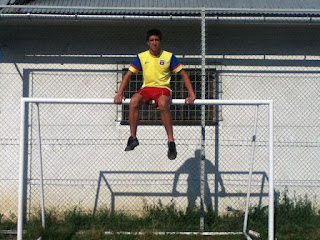 Today we went back to Slovakia to share with the people there. We had a great day and all of Ezras food only went down and not back up. What an accomplishment!!!!! Tyler however is now married to a beautiful polish lady, in her lower 80’s and is happy as could be. Karen was not sure of her son getting married while here, but then found out he was worth 3 goats, and an area rug (that we are pretty sure was once a live animal). So good trails Tyler and blessings to a block house full of young soccer players. Jamie has made the record books by being told his is crazy in more languages than we can count. He has however tried his best to find a wife, with no success. Doug, as always, has been our fearless leader. He has honorably sampled every polish sausage served to us and then explained its flavors with extensive detail before we subject ourselves to it. Thank you Doug. (Future note: Taste just like a Vienna Sausage with something else. Is not a good description, so do not eat this one.) On the other hand Pastor Holland has been a REAL trooper. The kids here love him and he has a blast telling them how old he is. They do get quite confused when he keeps flashing 10 fingers over and over and over and then holds up 3. They seem to think it is some kind of American game with the same answer every time.
Well fans so sorry to make this short but it is nighty night time and we have another big day tomorrow. Will update you on the rest of the group when I return. Love you Chug Bug….Love you Hot Rod…..and Daddy will be home to take care of mommy real soon…till then you know what to do……D