So, today is Sunday, and we have had quite a busy day.
We got up early this morning to leave for church to ensure that we were there on time. This was especially critical considering Pastor Holland would be preaching. We ate breakfast, and went outside to await our vans. Well, a van eventually showed up. Van. Singular. Yes there was supposed to be two vans. Apparently, the other driver had a problem, and couldn’t be here. So, we all packed into Jerry’s van, Patrick’s car, and the one rented van. (Hey, this is Tyler typing. Bye.)  Continuing after that untimely interruption… We rode into town packed into the various vehicles.

Check out this panorama I took on location at the church: 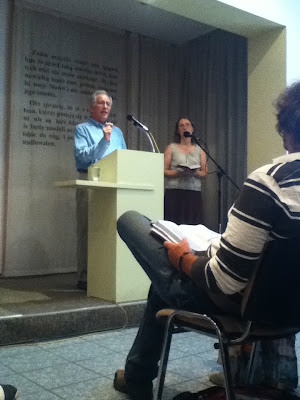 Once there, we sang several songs, two of which I recognized: How Great Thou Art and Revelation Song. I found it kind of difficult to sing along in English while listening to the song in a foreign language, but you could tell that these people were truly worshipping. Most of us gave a short introduction to the congregation. Jamie’s was my absolute favorite though: “My name is Jamie. I am currently 16 years old. I do not have much to share.” 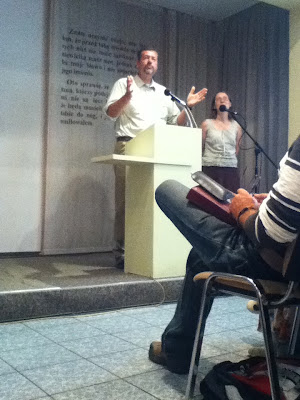 Pastor Holland then preached a sermon on Peter’s statement “You are the Christ, the Son of the living God.” This was his first time ever preaching through an interpreter, but he did an exceptional job.

After church, we were invited downstairs for coffee. As we waited for the bus to arrive we tried to decide where to eat lunch.

One of our translators knew a good place to eat, so we followed her to a Polish restaurant that (luckily) served pizza. The pizza was delicious although several members of our group were surprised to find their drinks coming in a glass bottle – no refill.

After lunch, we headed back to the hotel. Donovan and several of the Andersens went on a shopping trip to the local Wal-Mart equivalent. I sent my camera with Donovan to take video. More on that below.
Our dinner this evening included Schnitzel and American French Fries; the ultimate culture clash in terms of meals. After dinner, we rehearsed the Redeemer skit in preparation for tomorrow, and had our nightly share time with the Roma. Pastor Holland spoke on prayer, and the night was concluded with lively music from a couple of Roma musicians.
Things are going well here, and we look forward to a full day of ministry in Szaflary tomorrow.

*Editor's Note: It is now time for Donovan's take on the events of today. As a slight disclaimer, the factual accuracy of the following is probably drifting closer to the 65% mark. You should be able to tell fact from fiction, with the exception of one thing. Donovan was indeed approached in a Polish supermarket while shooting some footage for me (thanks Donovan). The factual nature of the interrogation that followed, however, can not be confirmed.


(From Donovan) Finishing up day 2 I feel the need to fill in all my fans back home with todays events……First off we attended church today and several of the Roma people came and joined us, Pastor Holland had a wonderful message that was introduced by 6-7 songs and followed by 4-5 more. Pastor Ken would be so proud, but please don’t get any ideas!!! Upon returning to the lodge, myself and a few others wanted to take a trip to the local super market. This is where I was introduced to “the law” “5-0” “smokey” “the man” or as I like to call them the man that screams in polish while I look utterly confused. Let me first say I was innocent and believe it or not IT WAS EZRA’S FAULT!!! See being the good friend that I am, when Ezra said “I don’t feel like going to the store but would you take my camera and film some so I can see what it looks like?” I was more than happy….that soon changed when we found out it is illegal to tape is a store!!!!!! After two very large polish men drug me to a dark room I explained that I was a tourist and helping a friend that could not make it….I pleaded not to take the camera because it meant so much to my dear brother so after several lashes they agreed. The camera was returned safe and sound but for some reason I keep walking into things and have started stuttering a lot a lot a lot……
On the better side, I have been very impressed with how many of the Roma people remember the members of our team from last year. They have asked about several people that are not here this year. We visited a Holocaust survivor and she asked about Meg Carter. We had a letter from Meg and after the translator read it the lady replied “God Bless Meg”….it was so touching. Later that day as we walked along the road several of the local cattle asked about Ricky Wampler. We replied that he could not come and they carried on about something we could not translate. I think they miss you Ricky but I’m not quite sure…. Well better save some for tomorrow……Love you Chug Bug…Love you too Hot Rod….Keep taking care of mommy!!!!!