A bit unexpectedly, I decided to join Baptist Collegiate Ministries at Virginia Tech on their 2015 Winter Break mission trip to Atlanta, Georgia. This trip will be the the 12th or 13th time BCM@VT has taken a mission trip to Atlanta, and, as a result, we have very strong connections to various ministries in this area. In addition to myself, there are five other guys and one girl on this trip: Rob, Haley, Dakota, Bradley, Adam, and Brandon.

We have just completed day two of our trip, and below is a recap of just a few of the things that have happened on the trip so far.


Join us in praying for the ATL team as they head out today spending the week investing in people and showing them the love of Jesus!
— BCM at Virginia Tech (@bcmvt) January 11, 2015


LT And pray for all those with whom we meet in Atlanta, that God's love will pour into their hearts and that they may know Him.
— Haley Bengtson (@haleybengtson) January 11, 2015

We fueled up and left Blacksburg around 9:00 AM on Sunday morning, and had a relatively uneventful trip to Atlanta which involved quite a bit of "cow calling."


God may own the cattle on a thousand hills, but Ezra's going to give Him a run for His money #PTLinATL #BringingItBack?
— Bradley Luckton (@BradleyLuckton) January 11, 2015

We arrived in Atlanta just in time for Passion City Church's 5:15 PM service. Despite Brandon's kind invitation, Louie Giglio chose not to join us at Steak 'n Shake after the service.

At Steak 'n Shake, we had dinner with a woman named Susan, her husband, and their son. She had met previous BCM@VT Atlanta mission teams at Steak 'n Shake, and it has become a bit of a tradition for both our teams and her to meet after the Passion City service. She shared some incredibly encouraging words about what God has been and is doing in her life and in their family with us.

Along with all of the other luggage we brought to Atlanta, we were carrying this painting, which has been lovingly dubbed "Judging Jesus" by previous Atlanta teams ("JJ" for short). We were tasked with returning him safely after he was *ahem* removed from the church we are staying at at the end of the Thanksgiving break mission trip.

Once everyone had moved their stuff into Crossroads church, where we are staying, Brandon, Adam, and I went shopping for the week's supply of groceries. We had a few adventures, as the Walmart we went to was a bit different than anything we were used to. We parked in a parking garage below the actual store, and then had a bit of trouble finding a buggy. We were also quite entertained by the escalator built especially for shopping carts.

Monday morning, we started our first day of ministry. We began with a "worship circle" in Atlanta's Centennial Park. We had some interest from passersby, including one man who sat  on a nearby bench and listened for a while.


After we were finished with the worship circle, we had lunch in the CNN center. In the middle of lunch, an older gentleman approached us, asking us if we were all Virginia Tech students. He then proceeded to relay the following information, which Brandon has captured for posterity. 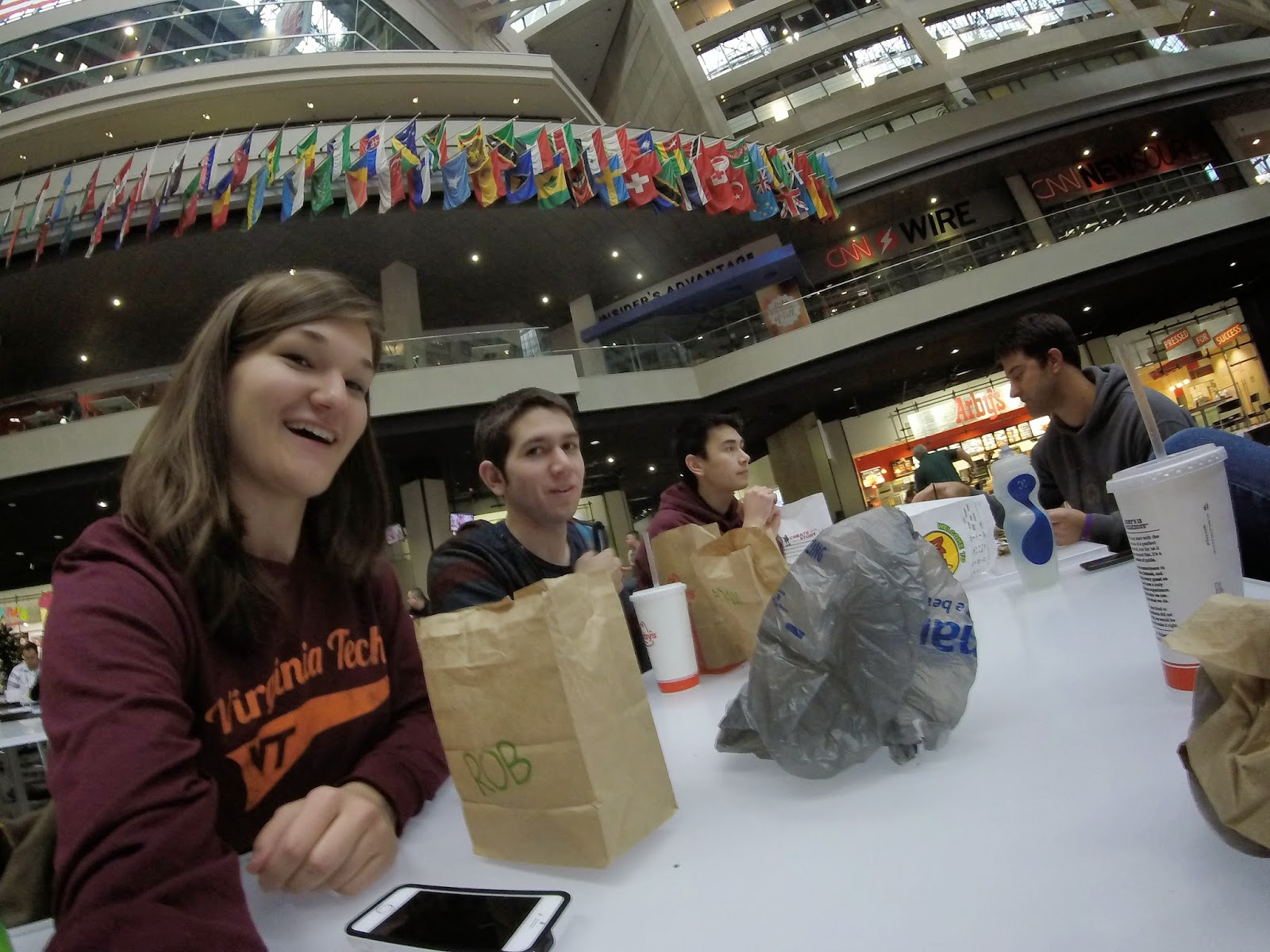 "My daughter graduated from Tech. And I have a friend who coaches football up there. His name's Frank... #PTLinATL #atlQuotebook
— Brandon Foster (@__brandonfoster) January 12, 2015 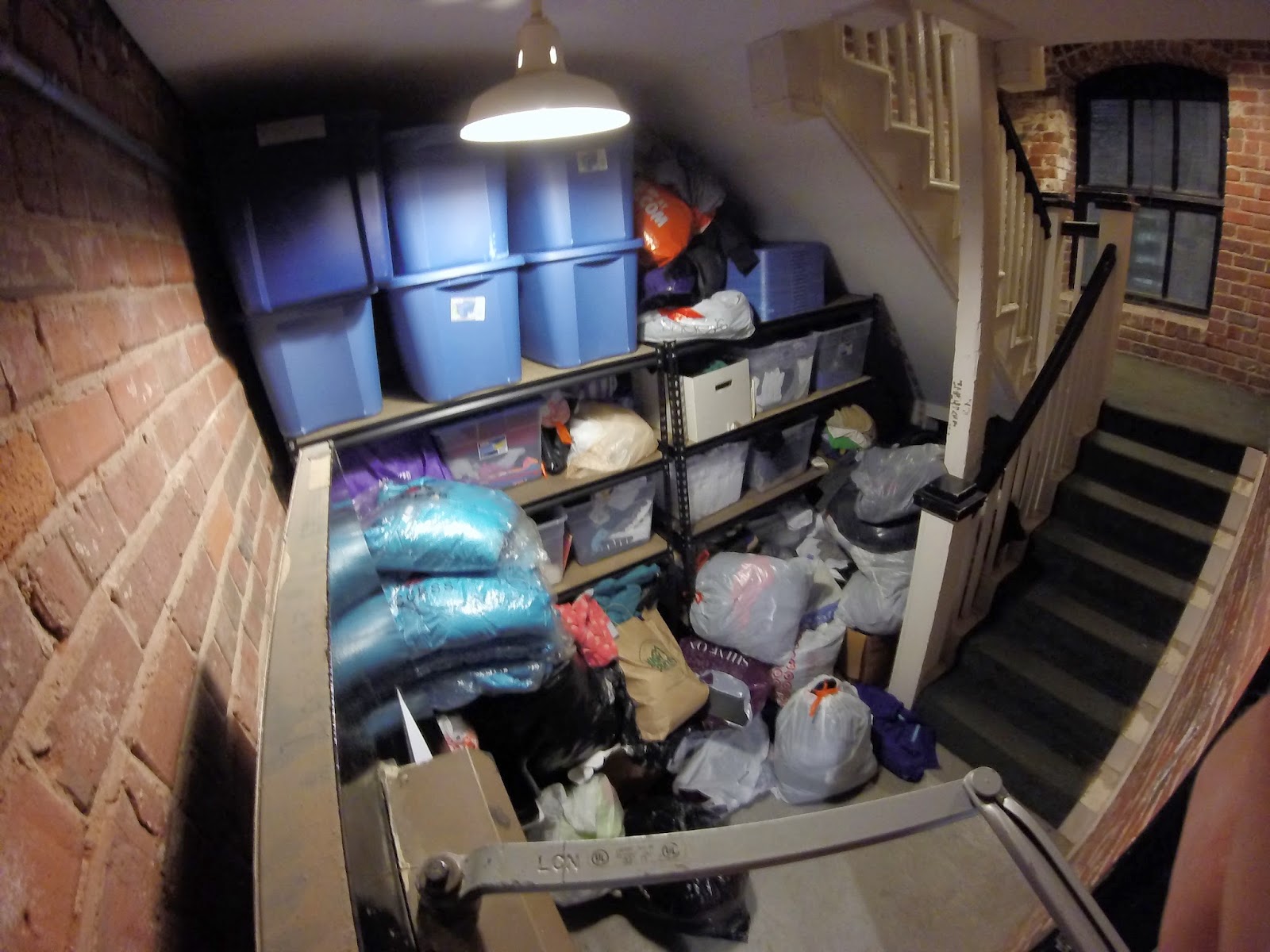 After lunch, we started work at a center that assists kids who are living on the streets of Atlanta. For most of the afternoon, we did our best to meet a few of the practical needs of the center. The large majority of our team began to sort the clothing donations that you see to the left which had piled up in a closet while Brandon and I worked on the computers that the kids who come to the center have access to. It had been a while since these machines had received some tender loving care, and I was grateful to be able to use a few of the skills that God has given me to help meet a practical need.

Taking a break from sorting clothes before the kids arrived, we decided to take a ride on the brand new Atlanta Streetcar system, because the fare is free the first 90 days. Near the end of our ride, we met the public relations liaison for the streetcar system, who Instagramed a photo of our group riding the streetcar. He was even kind enough to tag @BCMVT!


If there's one thing the Lord has already been teaching me, it's His sovereignty and control over every situation in our lives. We have heard so many testimonies of things that some people would try to write off as coincidence and experienced some of these ourselves already on this trip. I can't wait to see what else the Lord has in store for us in the coming three days.

Check back for updates, and follow our tweets with the hashtag #PTLinATL.
Posted by mrzchuck at 2:43 AM